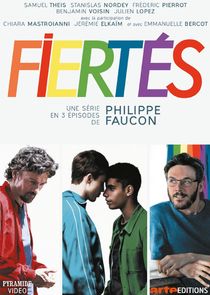 In 1981, it was still illegal to be homosexual in France. Today, same-sex marriage is recognized and it paved the way for adoption. PROUD tells the story of Charles, Victor and Diego, three generations of the same family who emerge as symbol of their time.

A chronology of tolerance and a portrait of one family through changing times.

January 2013. Victor is an accomplished architect. He never has much time for his son, Diego, a kid with a strong will who's in his final year at high school. Serge is back living with Victor and Diego, and things are very clear. Together, they form a kind of undefined blended family.

When Diego is called in by the principal for fighting with his classmate, Paul, who made racist and homophobic comments, it is Serge who comes in to receive the lecture from the headmistress.

As in any father/son relationship, Victor and Diego sometimes have a hard time getting along. Diego has forged a secret bond with his grandfather, Charles, who still has a strained relationship with Victor. Despite his solitude since Martine died, Charles is clearly not part of Victor's life.