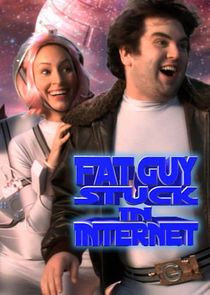 Fat Guy Stuck in Internet is a comedy series broadcast on the Adult Swim nework that follows hotshot computer programmer Ken Gemberling as he inadvertently gets sucked into the internet. Gemberling is joined by his friends Bit and Byte who believe he is the "chosen one" that will save the internet, all while being pursued by the bounty hunter Chains. This series was created by John Gamberling and Curtis Gwinn.

A computer programmer is sucked into the internet, where an evil C.E.O. tracks him down with the help of a bounty hunter.

1x8: Blaster of Both Worms

1x7: Belly of the Skrales

1x6: Atonement with the Bucket

1x5: Eating with the Goddess