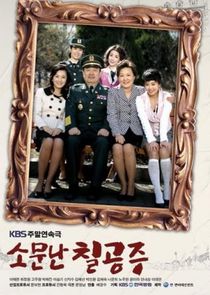 The drama is centered around the four daughters of Na Family. The story of their oldest daughter, Duk Chil, revolves around the divorce she has from her unloving husband, Soo Han after she is caught having an affair with her Soo Han's best friend. She then re-marries her male business partner, Wang Sun Taek, but most deal with the problems that re-married couples often face. The upbeat and confident second daughter, Sul Chil who is the pride and joy of the family and plays the role of the son her father never had is a captain in the Korean army. She is in love with her friend Il Han, while one of her fellow army soldiers, Ha Nam, is in love with her. Sul Chil's fraternal twin, Mi Chil, is an attractive woman but is also the family's troublemaker. She is jealous and resentful towards Sul Chil because she is Mr. Na's favorite daughter. As an act of revenge, Mi Chil steals Il Han from Sul Chil but then soon faces more problems in her relationship with Il Han. Finally, the youngest daughter, Teng Chil, becomes pregnant and marries her boyfriend, Tae Ha at a young age. However she then faces numerous conflicts with Tae Ja who has trouble staying faithful to her