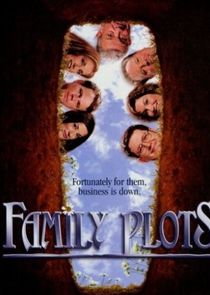 Family Plots was an American reality series that followed the ongoing events and employees at the family-run Poway Bernardo Mortuary in Poway, California.

The show centered on the relationships between the employees, for instance Chuck Wissmiller and his three daughters - all of whom worked together at the mortuary during the show's run. Each episode featured one to two funerals with families who shared their grief while celebrating the life and contributions of their loved ones. The departed themselves were seen from time to time on the show, but care was taken by the crew to portray their memory respectfully. While the work done in the preparation room was also shown, the more graphic portions of mortuary work were depicted deferentially.

An intimate look at the inner-workings of the family-run Poway-Bernardo Mortuary in Poway, California.

The Web We Weave

2x7: For Funerals and a Wedding