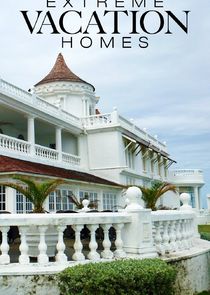 Extreme Vacation Homes gives you an all-access pass to the most luxurious, opulent, one-of-a-kind, breath-taking vacation homes all around the world.

First up, we'll hit the slopes in Whistler, Canada, and check out one of the world's most luxurious ski chalets. Known as Akasha - this 5,000-square-foot mountain top aerie combines rustic log cabin elements with Indian-inspired touches. Spread out over four levels, the home is centered around a spiral staircase, anchored by a 48-foot ancient red cedar. There's also a cozy two-story great room, luxurious master suite, and top floor cupola with 360-degree panoramic views. But head down to the base of the tree and you'll discover Akasha's star attraction - a 30-foot indoor lap pool with a cascading waterfall. Then we'll jet off to Italy's romantic Amalfi Coast and visit Positano's Torre di Clavel - an ancient stone fortress built into the side of a cliff. Built as a 12th century watchtower, the tower rises straight out of the sea on a promontory and includes eight bedrooms and over 10,000 square feet of indoor living space - a labyrinth of winding staircases, open-air hallways and sun-soaked terraces. Sitting on nearly five acres of land, the complex is made up of three separate living quarters over a total twelve levels. Explore the properties secrets - hidden nooks, ancient mosaics, and even an ancient subterranean grotto, accessible via a series of small staircases. Next up, we'll explore Jamaica's bustling resort town of Montego Bay and discover the one-of-a-kind Bambu Villa - a 10,000-square foot compound built in the 1960s on the site of an old plantation. Made up of interconnecting pavilions, Bambu has six bedrooms, lush tropical gardens, and sweeping views of the Caribbean. Its style combines classic Caribbean architecture with old-world Venetian glamour. From the classical archways and Italian sculptures to the dramatic swimming pool and sweeping central staircase, Bambu's old world influences are pretty obvious. Finally, we'll take a ferry to remote Orcas Island - one of the San Juans just off the coast of Washington state - and check out a mountainside EVH that's built to blend in. Located on a sloping 11-acre lot with stunning panoramic views, this ultra-modern, steel framed house was designed to fit into the landscape, only touching the ground via two slender concrete supports. Seeming to hover over the ground, the house opens up on both sides via broad multi-slide doors to facilitate maximum indoor-outdoor living. Just kick back, relax and watch the eagles soar right over the balcony.