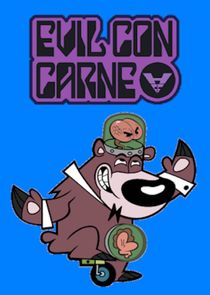 Evil Con Carne is about a criminally insane brain who is attached to a bear and his disembodied stomach. Most of the jillionaire Hector con Carne's body was destroyed in an accident, but thanks to modern technology his brain and stomach were attached to a stupid, lumbering bear named Boscov. Despite Hector's circumstances he has help from other henchmen such as General Skarr and Major Doctor Ghastley. From Maxwell Atoms, creator of The Grim Adventures of Billy and Mandy. Character Guide Hector Con Carne: A very rich man whose body was blown up in an explosion all that was left of him was his brain and his stomach. they were both put into containers and put onto a bar named Boskov. Hector's ultimate goal is to conquer the world. Major Dr. Ghastly: A scientific Genius, who works for Hector Con Carne. She secretly had a Crush on Hector.

The series exploits the failed tries of an unlucky bad guy, Hector Con Carne, to domain the world, along with a stupid bear, an otimistic and annoying mad scientist and a grouchy army official.

Hector, King of the Britons

2x9: Hector, King of the Britons

2x1: The Mother of All Evils 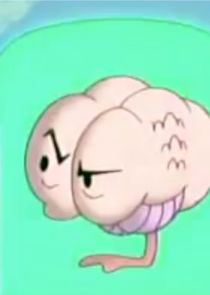