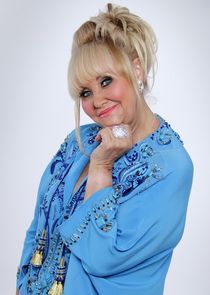 Too much is never too much, at least according to interior designer Esther Tracy, who shows off her flamboyant, over-the-top designs in this series. Esther's son, David, doubles as her project manager, trying to keep her on track and, more importantly, on budget, as his mother works on projects for clients who may be shocked by the final results. Esther's work includes turning a dreary basement into a hockey-inspired space, and revamping an upscale restaurant in her first commercial job. The designer's goal is to Estherize the world... one home at a time.

Esther is commissioned to do repeat client Enzo's great room.