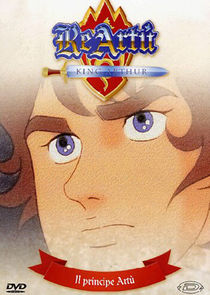 When Prince Arthur was a baby and his father King Uther ruled Camelot, Lavik, another king who wishes to conquer Camelot, attacked the castle. Arthur is saved by Merlin who sent him to another knight to keep Arthur in a safe place. For many years this knight brought Arthur up as his own son. At the age of 15 Arthur attended to a tournament with his stepfather. There he could pull the sword Excalibur from a stone. This action proved that Arthur is the legitimate king of England. Finally Arthur's stepfather revealed him his royal lineage. Since then King Arthur and some subjects began to fight against the wicked King Lavik, who is helped by a witch called Medessa.

2x19: Appearance of the Phantom Mermaid

2x17: The Black-Horsed Knight who is Shrouded in Mystery

2x16: The Dragon that Spurts out Fire and the Youth