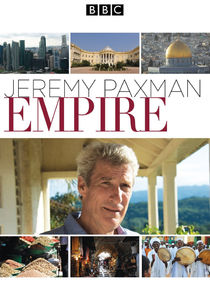 Making sense of modern Britain is a tough call. But the explanation, more often than not, lies in the British Empire. Jeremy Paxman believes that unless we come to terms with our Imperial past, we'll never understand who we are and where we're going today.

So in this series, he cuts through our national embarrassment, turning his forensic and unapologetic gaze on to this most compelling period of our history – and tracing its far-reaching influence on the present.

Written and presented by English broadcaster, journalist, and author Jeremy Paxman, this richly detailed documentary follows the rise of the British Empire. At its height, the small island ...

In the final part of his personal account of Britain's empire, Jeremy Paxman tells the extraordinary story of how a desire for conquest became a mission to improve the rest of mankind, especially in Africa, and how that mission shaded into an unquestioning belief that Britain could - and should - rule the world.

In Central Africa, he travels in the footsteps of David Livingstone who, though a failure as a missionary, became a legendary figure - the patron saint of empire who started a flood of missionaries to the so-called 'Dark Continent'.

In South Africa, Paxman tells the story of Cecil Rhodes, a man with a different sort of mission, who believed in the white man's right to rule the world, laying down the foundations for apartheid.

The journey ends in Kenya, where conflict between white settlers and the African population brought bloodshed, torture and eventual withdrawal.

1x2: Making Ourselves at Home