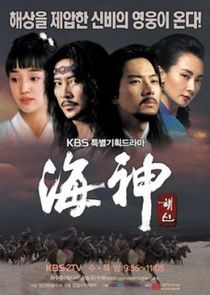 Based on the life of a true historical figure, Emperor of the Sea is an epic Korean Drama based on a novel by author Choi In Ho. Choi Soo Jong stars as Jang Bogo, who rises from a lowly slave to the military commander of the sea during the Unified Shilla Dynasty (676~935). Along the way, he battles pirates, and engages in a heated rivalry with Madam Jami, a Shilla noble who squares off against Jang Bo Go for trade rights in the South Sea. Song Il Gook, winner of the 2002 KBS New Actor award, is Yeomjang, Jang Bo Go's charismatic comrade, who supports Jang in his ascension to The Emperor of the Sea. But Yeomjang competes with Jang for the love of Jeong-hwa.

Jang Bo Go (Choi Soo Jong) was a slave from Shilla (a Korean dynasty that lasted from 57 B.C. until 935 A.D.) He was sold in China during the Tang Dynasty, where he was trained as a ...