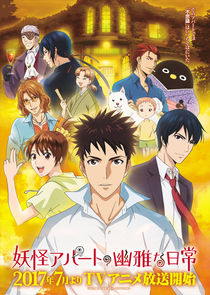 Yūshi Inaba is a 16-year-old boy whose parents died three years ago. He moved into his uncle's house, but resolved to move into a dormitory in high school. Those plans were dashed when that dormitory burned down. He eventually finds an apartment with cheap 25,000-yen (about US$220) rent. Yūshi finds out too late that the apartment is home to supernatural creatures such as ghosts, yōkai, and mononoke, and his daily life becomes embroiled in the eccentric apartment.

1x24: The Storm Before the Storm

1x18: Words From the Bottom of Your Body