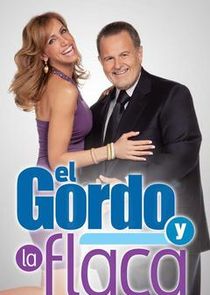 El Gordo y la Flaca (The Fat Man and the Skinny Woman) is an American Spanish-language entertainment news show. El Gordo y La Flaca first aired on September 21, 1998, hosted by Raúl De Molina, El Gordo, multiple Emmy award winner for his contribution as co host of this show and Lili Estefan, La Flaca. Estefan is the niece of music mogul and producer Emilio Estefan, the husband of singer/songwriter Gloria Estefan. She is also a well- known Cuban model and show host for "El Gordo y La Flaca."Molina's often irreverent attitude is balanced by Estefan's more demure manner. The show combines interviews with actors, musicians, and other celebrities with reports on their comings and goings.The show appears weekdays on the Spanish-language television network Univisión. It is filmed in the network's studios in Miami, Florida.

On December 15, 2006, as a send-off homage to Rebelde, El Gordo y la Flaca opened with the cast dressed in Elite Way school uniforms, with Lili Estefan as Mía Colucci and Raúl De Molina as Giovanni Méndez(complete in dyed orange/red hair), while doing a parody to the show's opening theme, Rebelde. It is notable that the homage was pre-recorded, as Raúl De Molina did not appear on the show on the day whenRebelde was shown for the final time in the United States.

Two presenters who are pleasant and fun tell the news of the stars.