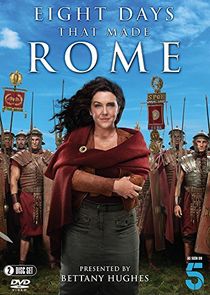 Eight Days That Made Rome is a docu-drama that leaves behind the conventional chronologies of Rome's thousand-year history and brings razor-sharp focus to eight days that created, tested and defined its greatness.

Each programme works as a stand-alone, as strong in its own right as part of a series and reveals a Rome relevant to us today, with its noblest and darkest instincts still resonating in the world around us.

On-screen presenter Bettany Hughes discovers the significance and resonance of these Eight Days along with us, the viewer, as she explores key sites in Rome's empire and meets expert witnesses on subjects ranging from psychopathy to ancient religion.

The Rebirth of Rome

Bettany Hughes recalls the time that marked Rome's symbolic break with its 1,000-year pagan past - the day in 337 AD that Emperor Constantine the Great was baptised a Christian. It was a moment of profound significance not just for the empire, but for the history of the world and one of its major religions. Constantine was one of the last great Roman emperors to rule over a united empire, giving it a new capital - Constantinople, today known as Istanbul - a city which would one day eclipse Rome as the greatest city on Earth.

1x8: The Rebirth of Rome

1x6: The Downfall of Nero