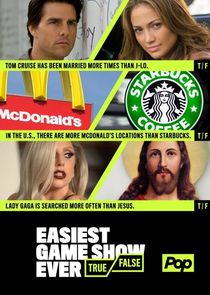 A pop culture, trivia-based game show, Easiest Game Show Ever, will head into production on October 19th on Pop with 20 episodes. Hosted by quick-witted comedian and actor Michael Ian Black ("The Jim Gaffigan Show," "Wet Hot American Summer," "The State"), Easiest Game Show Ever puts a new twist on "True or False?" and gives contestants the opportunity to win up to $100,000 cash per episode. Pop's Easiest Game Show Ever says it all in the title. In each episode, a pair of contestants work together to answer true or false to 20 pop culture facts. These statements test their instinctual knowledge of entertainment, food, fashion and culture. True or False: Betty White is older than sliced bread?; In the U.S., there are more McDonald's than Starbucks?; According to the Guinness Book of World Records, Madonna is the bestselling female artist of all time? After the team's initial responses, Michael and his co-host Abbi Crutchfield spend the rest of the show revealing additional fun facts to the contestants, giving them the opportunity to doubt their initial responses and even change their answers!

So, here it is broken down: contestants have a 50/50 shot at answering each question correctly, THEN they get more information and are allowed to change their mind, THEN they only need to answer 15 out of 20 correctly to win a maximum prize of $100,000 cash. It seems like…the Easiest Game Show Ever…True or False?