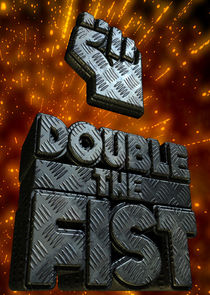 A send-up of extreme sports and shows like "Jackass". Whereas the Jackass guys try to humiliate and hurt each other, the guys on "Double the Fist" (who call themselves "The Fist Team") do things that would obviously kill them. They manage to get around this by firstly ignoring the rules of death, and secondly by the use of camera tricks and cheap-and-nasty computer generated effects (which are themselves used for comic effect). Steve Foxx, the host, is the most extreme person on the planet, and the only person capable of rewarding people with The "Full Fist", which is the ultimate symbol of extremity. The pursuit of 'Fist', the main aim of the 'contestants' on the show, requires strength, power, knowledge, and most importantly, PAIN!

"Double the Fist" is a show about four of the most extreme people on the planet in their pursuit of 'Fist'. The means: strength, power, knowledge, and most importantly, PAIN! The 'Fist' ...