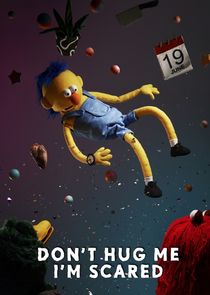 Don't Hug Me I'm Scared is a web series of short films.

Each episode is made to appear like a typical children's television program, consisting of singing and talking puppets similar to those of Sesame Street, but eventually takes a dark turn, usually involving gore. The series parodies children's television shows by ironically juxtaposing puppetry and musical songs against psychedelic content and disturbing imagery. Six episodes have been released, on the subjects of creativity, time, love, technology, healthy eating, and dreams.

All alone, Yellow Guy tries to stop a lamp from teaching him about dreams. While Red Guy finds out the truth about the puppet's existence.