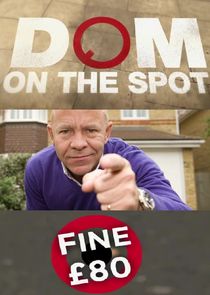 Never before have so many on-the-spot fines been issued in Britain, with more than 30 million pounds worth of tickets issued every month. But, however frustrating, these fines are here for a reason: to protect us.

Fronted by the people's champion Dom Littlewood, Dom On The Spot delves behind the statistics to follow the men and women charged with upholding the law.

In this new daytime BBC One show Dom accompanies speed camera operators, parking attendants and council enforcers giving fines for crimes such as dog fouling and fly-tipping, as well as Traffic Police handing out speeding tickets and fines to road tax evaders.

Dom will be on the spot accompanying these officials, exploring why the fines are dished out and questioning why we break the law on a day to day basis He'll also be meeting the victims affected by these day-to-day crimes.

Dom is at the London parking and traffic tribunals, where he meets a driver who is appealing a hefty parking fine. And there is some bin lorry bother in Cardiff as one resident could be fined thousands of pounds for dumping the wrong waste.