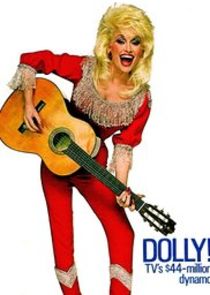 Dolly! is an American variety show starring Dolly Parton that aired in first-run syndication during the 1976-77 season. In the mid-1970s, Parton was approached by Bill Graham, president of Show Biz, Inc., the same company that produced The Porter Wagoner Show (on which Parton had costarred for seven years), and soon afterward the syndicated variety show Dolly was born. The show boasted a budget of $85,000 per episode, an impressive sum at the time for a syndicated series. (It was, in fact the most expensive show to be produced out of Nashville to that point.) A variety of Nashville and Hollywood stars were scheduled to appear, including Karen Black, Tom T. Hall, Emmylou Harris, The Hues Corporation, Captain Kangaroo, Marilyn McCoo and Billy Davis, Jr., Ronnie Milsap, Anne Murray, Kenny Rogers, Linda Ronstadt, KC & The Sunshine Band, and Anson Williams. According to her 1978 biography, Dolly by Alanna Nash, Parton spoke to Bob Dylan and he initially agreed to do the show, but eventually bowed out due to his discomfort with the television medium at the time.