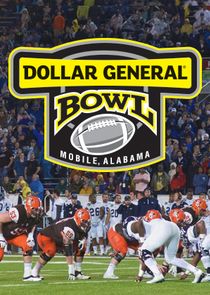 The Dollar General Bowl is a postseason NCAA-sanctioned Division I FBS college football bowl game that has been played annually at Ladd Peebles Stadium in Mobile, Alabama since 1999. The game currently matches teams from the Sun Belt Conference and the Mid-American Conference. The game was previously known as the Mobile Alabama Bowl from 1999 to 2000. It was then known as the GMAC Bowl from 2000 to 2010 when its corporate sponsorship was GMAC Financial Services, and then known as the GoDaddy.com Bowl from 2011 to 2013 when Go Daddy took over sponsorship and then the GoDaddy Bowl from 2014 to 2015. Dollar General, a variety store chain, took over sponsorship on August 17, 2016 renaming it the Dollar General Bowl. From 1999 to 2009, the bowl pitted a Conference USA team against a team from either the Mid-American Conference or the Western Athletic Conference. For the 2010 game the Atlantic Coast Conference was to participate in the bowl as its ninth bowl tie-in. The ACC failed to have sufficient bowl-eligible teams to fill the slot, and the bowl chose Sun Belt conference champion Troy as a replacement. The Mid-American Conference was the other conference tie-in.

The 2001 game between the Marshall Thundering Herd and East Carolina Pirates set the record as the highest scoring bowl game of all time, and Marshall achieved what was then the greatest scoring comeback in Bowl history. In this contest, Marshall battled back from a 38–8 deficit to win 64–61 in double overtime. Thundering Herd quarterback Byron Leftwich threw for 576 yards in the game. When the GoDaddy Bowl first began, it was played as one of the first games of the bowl season and occupied a pre-Christmas date. The 2006-07 season saw the game moved to after New Year's Day, and it served as one of the last bowls played before the national championship game of either the Bowl Championship Series or the College Football Playoff. For the 2015-16 season, the GoDaddy Bowl was moved back to its pre-Christmas slot.

In the first January playing the Golden Eagles of Southern Mississippi knocked off the Ohio Bobcats, 28–7. The 2008 game became the largest blowout in bowl history, with Tulsa beating Bowling Green, 63–7. On October 18, 2010, it was announced that the GMAC Bowl was renamed the GoDaddy.com Bowl. The 2013 edition of the GoDaddy.com Bowl was played on January 6, 2013, and featured No. 25 Kent State from the MAC and Arkansas State from the Sun Belt. On May 15, 2013, it was announced that GoDaddy, in accordance with new generic top-level domain extensions being rolled out later in the year, had dropped the ".com" from the bowl's name, rebranding it as the GoDaddy Bowl.

The 2016 Dollar General Bowl is being broadcast live tonight from Ladd Peebles Stadium in Mobile, Alabama. The Ohio Bobcats (8-5) are going up against the Troy Trojans (9-3).