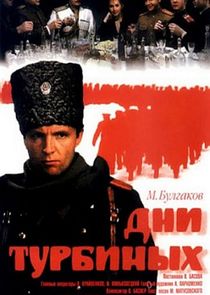 The story tells about the intelligentsia and the revolution in Russia, about the life of the family of Turbin officers during the Russian Civil War.

Kiev. Winter of 1918-1919. The power in the city passes from the hetman to the Directorate of Ukraine.then from Petliura to the Bolsheviks. Turbins and their acquaintances have to make their choice. Colonel Alexei Turbin and his brother Nicholas remain loyal to the White Movement and bravely defend it, without worrying about their lives. Elena's (née Turbin) husband, Vladimir Talberg flees shamefully from the city with the retreating German troops. In this troubled time, the family and close friends gather and celebrate the New Year. A strange and slightly ridiculous person comes to visit them, a distant relative of the Turbins - Larion Surzhansky (Lariosik).