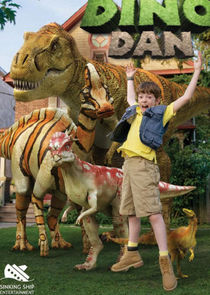 Dino Dan is a Canadian/American television series for children. It is shown on TVO Kids in Ontario, Nick Jr. in Australia and the US, and CITV in the UK. Dino Dan follows the adventures of a ten-year-old paleontologist-in-training, Dan Henderson, and his friends, who uncover clues about the past and secrets of the dinosaurs. The show combines live action with CGI dinosaurs.

Dan learns about dinosaurs as he conducts experiments on "dinosaurs" that he sees in his environment. It is unknown if they are real or the result of his active imagination, but other characters accept that Dan sees them. Some animals, such as Dan's dog, have also seen them, and in the episode "Dino Trackers", Dan's younger brother can also see the dinosaur tracks.

A young boy with a love for dinosaurs goes on adventures.

When Mom takes Trek and Penelope to Marineland, Trek gets so excited he imagines what it would be like if there was a show with prehistoric marine reptiles!