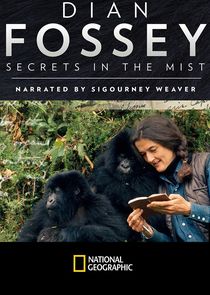 Dian Fossey was a pioneer, a renowned primatologist who dedicated her life to the study of gorillas and their protection. She became an international icon, but in Rwanda she was waging a war. This fight ultimately cost Fossey her life, and her brutal murder in 1985 remains unsolved to this day.

The series weaves together three story strands. The first is the story of Dian's life and work – her childhood, her first trip to Africa and her arrival in Rwanda where she set up the Karisoke Research Centre to study Mountain Gorillas. The second strand tells the story of Dian's murder in Rwanda and the trial of her American co-worker Wayne McGuire, who was found guilty of her murder. Wayne fled Rwanda before the trial began but was convicted in absentia. He has always maintained his innocence. We review the scant evidence presented at the trial and speak with people who were involved in investigating the murder. Finally, we will tell the story of Dian's legacy through the Pablo troop of gorillas, the offspring of gorillas who Dian knew and studied, and that survived the very worst years of poaching and habitat loss due in large part to Dian's efforts.

This stunning three-part documentary series features rare and previously unseen archival footage of Fossey in her daily habituations as she studies gorillas up-close, and includes in-depth interviews with some of her closest colleagues and friends including her research assistant, who was accused of her murder, Wayne McGuire and friend Sir David Attenborough.

The story of Dian Fossey, a scientist who fought to protect the vanishing African mountain gorillas, which was found brutally killed in 1985.

Murder on the Mountain

Gorilla researcher Wayne McGuire was found guilty of Dian Fossey's murder after an unskilled investigation by the Rwandan police provided few clues to the mystery. McGuire fled the country before he could be arrested. At the murder trial, a death sentence was passed on Wayne McGuire. He has lived with consequences of his conviction ever since. Did he really kill her or has he been the victim of a 32-year injustice? If not him, then who?

1x3: Murder on the Mountain

1x2: Dark Side of the Mountain