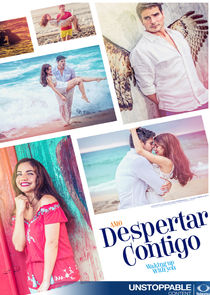 Despertar Contigo is a Mexican telenovela produced by Pedro Damián for Televisa. It is a free version of the Colombian telenovela, Pobre Pablo.It premiered on August 8, 2016. A total of 117 episodes have been confirmed so far. The series is starring Daniel Arenas as Pablo Herminio, Ela Velden as Maia Alcalá, Aura Cristina Geithner as Antonia and Enoc Leaño as Othón