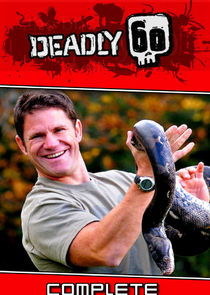 Deadly 60 is a British wildlife documentary programming aimed at children and young people, which is broadcast on CBBC

Each series sees Backshall and his camera crew (who are often themselves seen on screen) travelling the world in an attempt to find the 60 "most deadly" animals in the world. Each episode of the series features several animals and each sequence sees Backshall tracking the animal in its habitat, and giving details of what makes the animal notable, with particular emphasis on its impact on the wider ecosystem and the manner of its predatory behaviour; thus, why it is "deadly". With two series so far produced, 120 animals have to date been featured in the programme . When series 3 is over there will be 180 animals on the list.

Deadly 60 is distributed by BBC Worldwide to many other countries. Most prominently to the US on NatGeo Wild from August 2011.

A lightly presented nature documentary series. In each season, adventurous British zoologist Steve Backshall travels around the world to select sixty of the most deadly and interesting ...