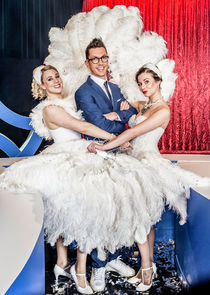 De Pappenheimers is a quiz on FOUR (earlier one) which was conceived by Tom Lenaerts. The quiz was nominated for a Golden Rose and comes from the stable of Woestijnvis. The title comes from the saying his Pappenheimers know what means as much as to know what to expect of people. Tom Lenaerts himself took the presentation of the first three series on his behalf, but because he was then too busy with The Pearl Fishers, the fourth series was presented by Erik Van Looy. From the fifth series Lenaerts doing it again. The tenth season (2011-2012) was presented by Steven Van Herreweghe. This time, because Tom Lenaerts a new fiction series, with might and main, working with Tom Van Dyck.

On November 29, 2012 the program returns to FOUR Van Herreweghe and presenter. The program will be interrupted twice by advertising, which own quiz application The Appenheimers is processed. In the 12th season of the presentation was in the hands of Bart Cannaerts. Participate in the program three teams against each other. Each team consists of two OBV's (Unknown Flemish) and BV. They play successively Love Round, Divide and Conquer (the team with the lowest score falls off) and Give and Take. Finally, the best team plays the Finals. The program was awarded in 2007 with Humo's Price Viewer. In the episode of December 13, 2009 (series 8 / ep 5) won the Friends Pieter-Jan Declerck and Ward Schouppe € 12,600. This is the largest amount ever won in the Pappenheimers.