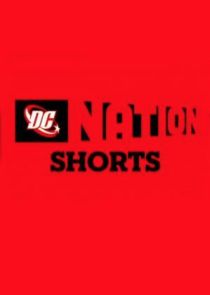 DC Nation Shorts are a series of shorts about various heroes and villains of the DC universe, in a variety of different styles. Superman, Batman, Animal Man, and the Metal Men are among those portrayed for comedic effect, and there are also "serious" shorts like those about Amethyst of Gemworld.

In the Batcave, Batman finds Bruce Wayne on the ground next to the Batcomputer, which has been destroyed. Bruce explains that the person who did it is he himself. As the power in the Batcave fails the backup generator kicks in and turns on several red lights revealing a Bruce Wayne robot in Bruce's old costume. The Batman android proves to be much more powerful then Terry. Bruce has no qualms with destroying it because it isn't human. Terry stuns the android with an electrified shock, causing it to fall behind the Batmobile. Bruce voice-activates the thrusters, incinerating the android. However, more Batman androids appear in the cave and Terry and Bruce prepare to fight them together.